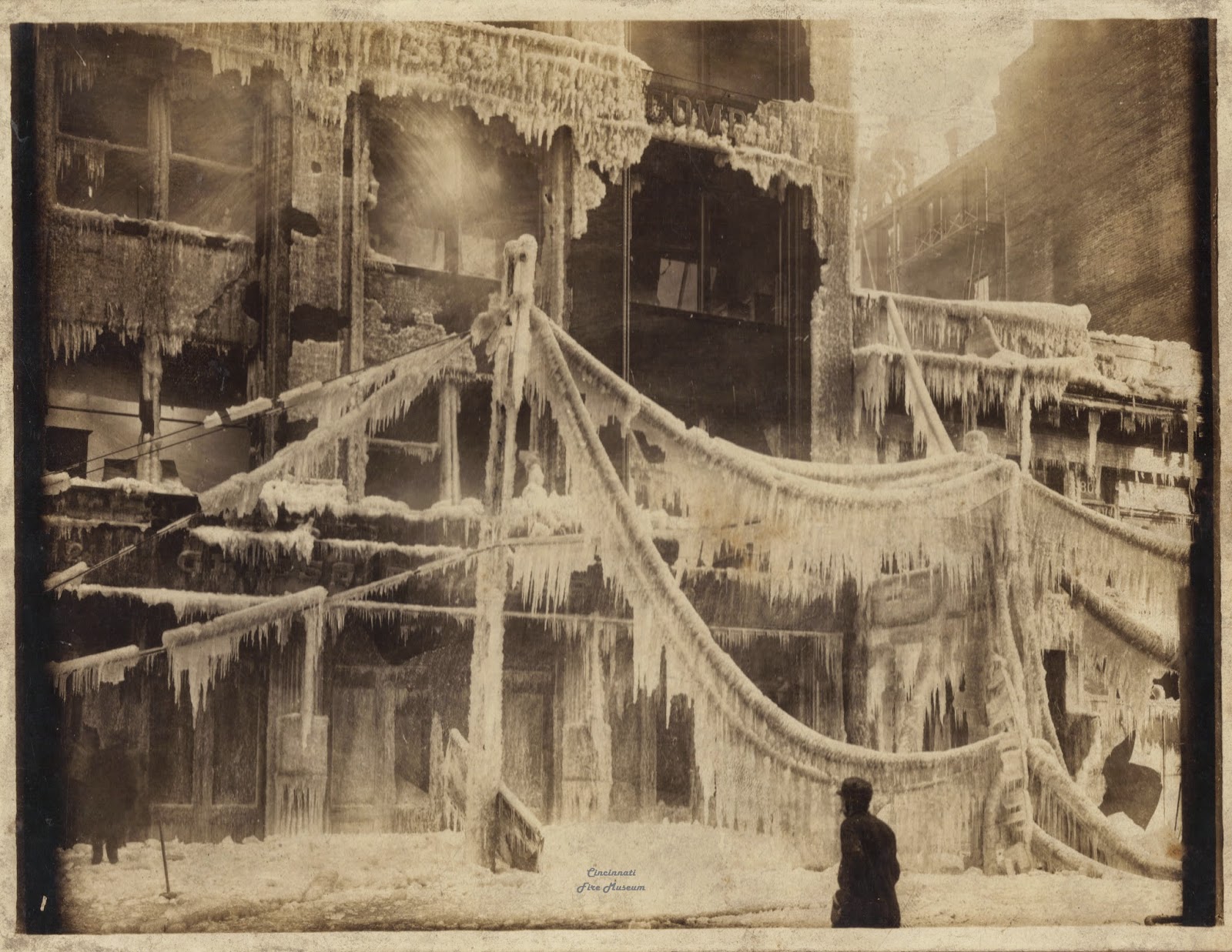 Some of the most extraordinary fires ever faced by the Cincinnati Fire Department occurred in the years between 1900 and 1910.  It was during this time that the paid steam fire department had reached its peak of efficiency, reliability, and size.  Despite the improvements made to the fire department, fire loss was massive in this period.  Buildings were being built bigger and higher than ever before.  Industries were using a wide variety of hazardous chemicals and materials that were largely unregulated, and fire prevention was extremely limited.  It was a period of great fires both in Cincinnati and across the country and it culminated at the end of the decade in a few days that would ultimately claim the lives of dozens of firemen. 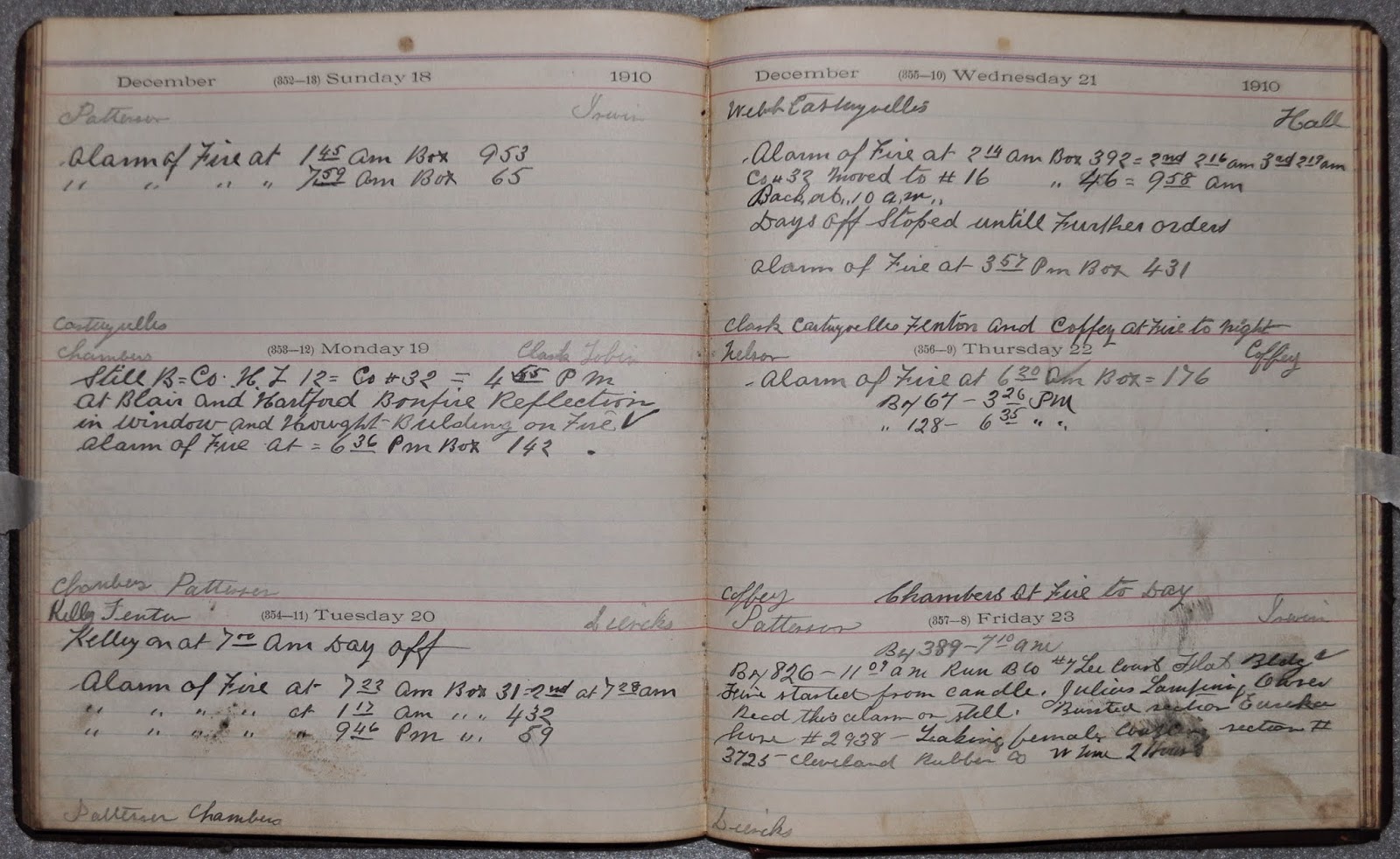 
Cincinnati was the starting point for these days of death and destruction.  The fire that would start around 2:14am on December 21st from Box 392 would ultimately burn for 222 hours.  35 steam engine companies would see action at the blaze that consumed 68 buildings and could have turned into a great conflagration threatening the entire business district were it not for the actions of the firefighters working to extinguish the flames.  Firemen dealt with freezing temperatures covered in ice from head to toe as walls collapsed around them.  Ultimately 4 people were killed, including three firemen, and six were badly injured.  Considering the conditions, things could have been much worse.

All was normal for night watchman Krumley.  At 2:09am he turned a key in an automatic signaling device on the 6th floor of the Krippendorf O'Neil Shoe Company indicating everything was fine.  As he started down the stairs to the 5th floor he noticed a glowing light in the courtyard separating his portion of the building from that of the Twinlock Company.  By the time he reached the ground flood he was surrounded by flames and had to run for his life.  Around the same time, Captain Peter Purcell recognized a familiar glow outside the windows of Engine Co.44s quarters.  Upon investigation he found a fire burning at the Twinlock Company and submitted the first alarm.  Several other persons were said to have discovered the fire at around the same time, including two reporters from the Enquirer who were walking home.  The alarm was received around 2:14am.

The Badge of Captain Peter Purcell
Purcell was likely the first fire officer on the scene of the
Sycamore Shoe District Fire
Courtesy: B.Houston Collection


Once ignited, the fire spread rapidly aided by several open shafts that created a draft in the building.  It was a cold and windy night which further aided the spread of the fire from one building to the next.  Insurance men had recognized this portion of town as a high risk for some time.  City planners had also noted the need to improve this area and at least one plan existed to turn the location into a park.

Around 3:30am the crew of Engine 04 was working at 9th & Sycamore street under the walls of the Krippenorf O'Neil Shoe Company.  Someone shouted that the walls were coming down.  Men scattered.  Pipeman Robert Grear was caught by the falling bricks and sustained a fractured skull killing him in the street.  His body was initially removed to the County Morgue just steps away before being moved again as fire threatened the morgue.  When Coroner Coe arrived on scene he witnessed the death of 18yo sign writer Walter Morris.  Police had formed a fire line and were having difficulty keeping the public at a safe distance.  Walls were regularly seen to be collapsing into the street.  Morris was standing under a telegraph pole when a wall of the Cahill Shoe Company tumbled down.  Debris shock-loaded the telegraph wires and snapped the pole near Morris.  He was struck on the head by the falling pole.  The auto patrol rushed him to the hospital but he could not be saved. 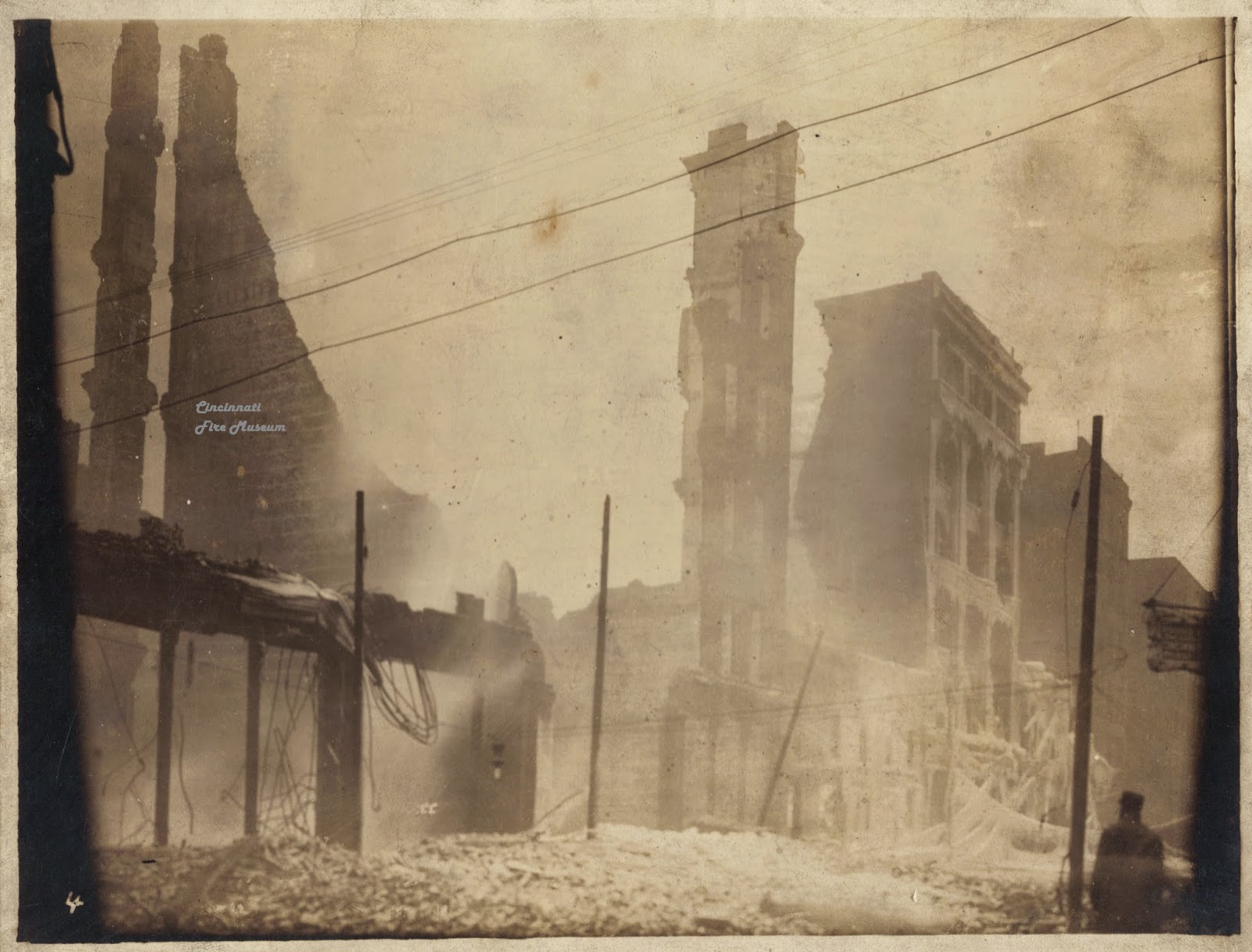 Robert Grear was killed in the rubble shown in the center of the image.
Note the precarious nature of the remaining walls.
Courtesy Cincinnati Fire Museum 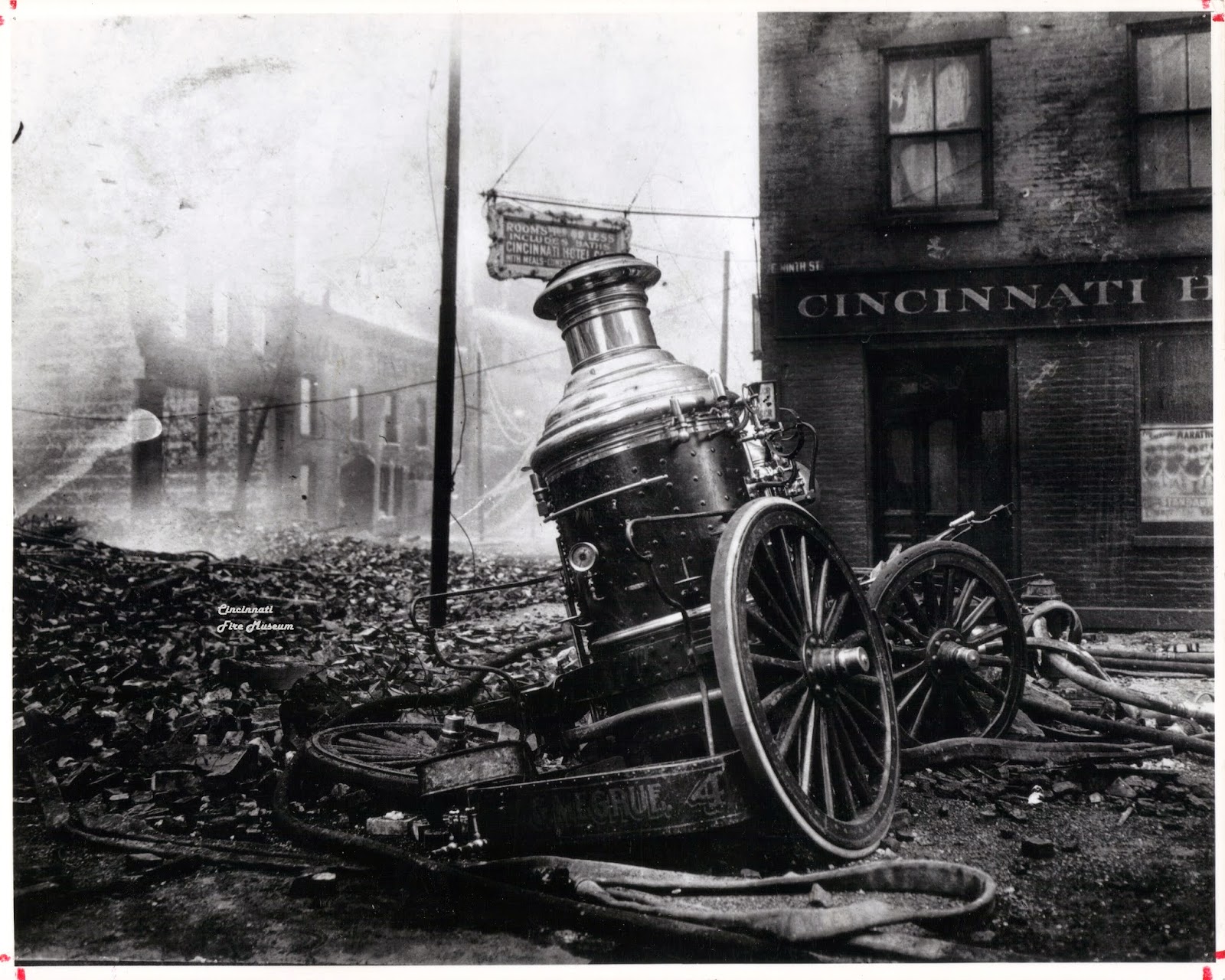 Grear was not the only loss sustained by Engine Co.4
Most of the company was injured and their Ahrens Steam Engine
The "E.G.Megrue" was destroyed
9th & Sycamore Sts
Courtesy Cincinnati Fire Museum


The wind seemed to push the fire in all four directions.  Firemen struggled to have an impact on the growing blaze.  Water pressure and volume were too low for a fire of this magnitude.  No high pressure system had yet been created for the fire department.  Some of the buildings were tall and the majority of the burning structures were out of reach of the hose lines.  Hot embers were carrying fire to still more buildings and the firemen, covered in a layer of ice, struggled to keep up.  Finally a break in the wind allowed for some gains.

Hook & Ladder 15 was working on Cheapside with several engine companies.  With the help of police, dozens of horses had been released from the Sycamore Street Livery Stable.  A lone horse was unaccounted for.  Firefighter Charles Schwengel ran back into the stable in an effort to find the animal.  Walls were coming down with frightening regularity at this point.  He had been inside for no more than five minutes when the stable walls collapsed.    Precarious tall ruins of walls would prevent anyone from searching for Charlie's body for a couple of days.  Dynamite first had to be used to bring down several walls to make the area safe enough for men to dig through the debris.  Finally around 4:20 on the afternoon of the 24th, Schwengel's body was recovered.

An entire city block had been lost in the fire.  Six men had been sent to the hospital with a variety of injuries sustained at the scene.  Among those recovering at the hospital was District Marshal Philip Hurley.  He had been in command of a group of companies operating from a one story roof on Cheapside.  The companies were using a high pressure device called a "three way."  Six men and a support beam were needed to secure the device which threw three separate streams of water.  Hurley noticed the streams were not falling in the ideal location and directed they be moved.  Suddenly the beam helping to stabilize the device collapsed and the hose, operating under 300 pounds of pressure, uncoiled, sweeping men aside and tossing Marshal Hurley off the roof.  He had several fractured limbs and was taken to the city hospital.  It was thought he would recover and he enjoyed a large number of visitors over several days in the hospital.  His condition suddenly worsened in the middle of the night and on December 29th he died. 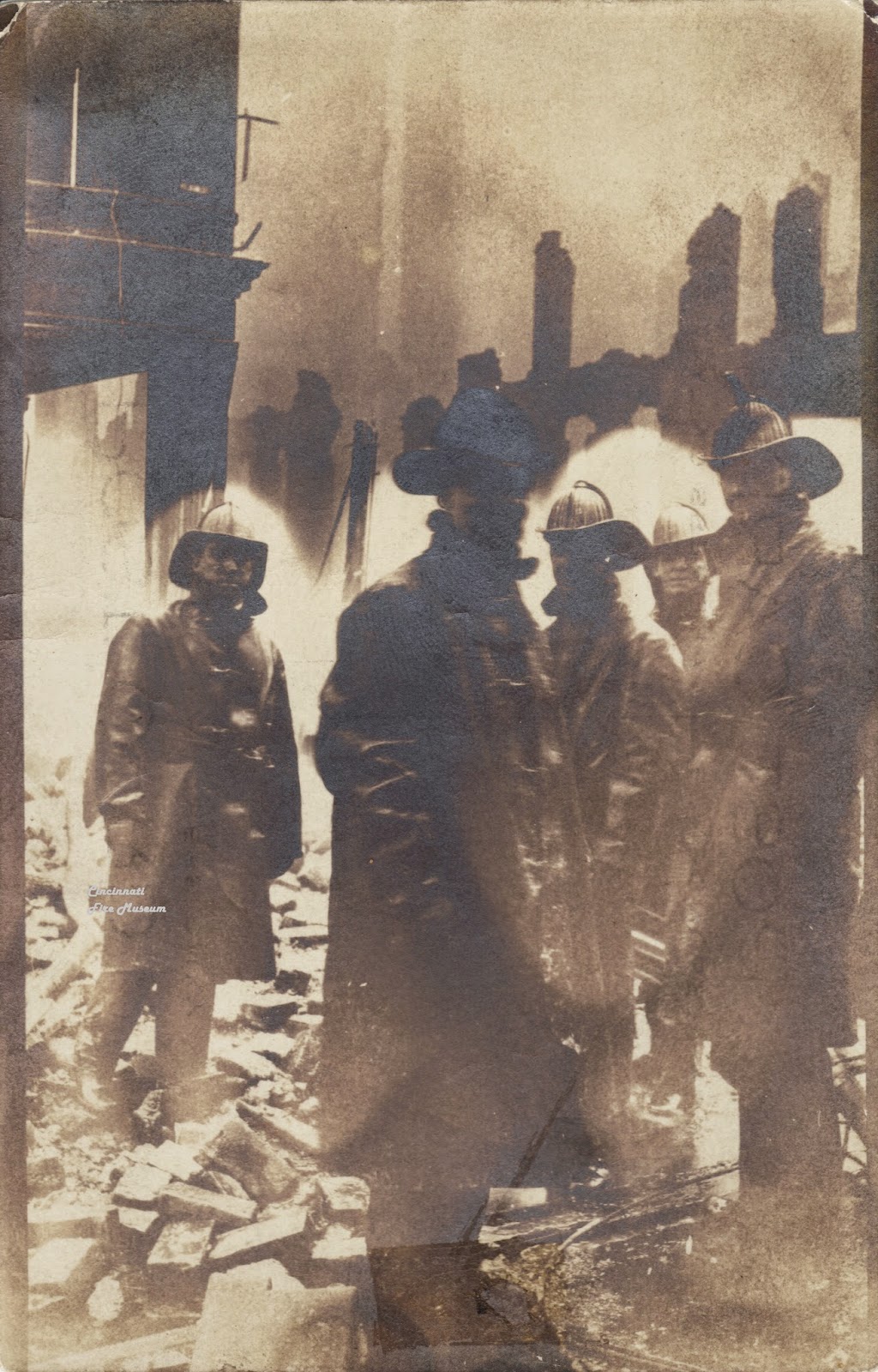 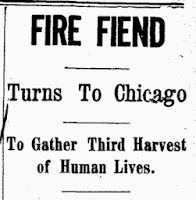 
The Shoe District Fire in Cincinnati was the first of several terrible events that occurred in the United States in the space of just a couple of days.  While firemen here fought desperately to keep Cincinnati's blaze from becoming a general conflagration that might have threatened the city, firemen in Philadelphia were called to a fire at the Friedlander Leather Remnants Factory.  When several men were trapped a group of rescuers moved in to free them.  A wall collapsed on the group killing 13 firemen and one police officer.  It is to this day the largest loss of firemen to occur in that city.  The death toll on December 22nd would far surpass that of the 21st.  Just 59 minutes into a fire at the Chicago Union Stockyards, a 6 story brick wall collapsed killing 21 firemen including the Chief of the Department.  3 Civilians were also killed.  It remains among the all time deadliest events for firemen in the United States.  All told, some 37 firemen and 4 civilians were killed in these disastrous fires.

Firefighters lost in the Shoe District Fire and listed among the Roll of Honor of the Cincinnati Fire Department include: 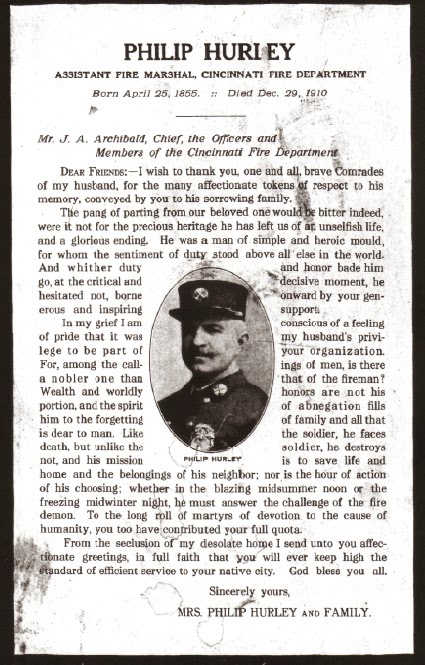 Update (11/3/2015):  Among the firefighters injured at the Sycamore Shoe District Fire was Guy Morgan of E04.  He fractured his right leg and was transported to the hospital were he shared space with Marshal Hurley.  It was thought Morgan would recover from his injuries without complication but gengrene set in and on 15 Jan 1911 his leg was amputated below the knee at the city hospital.  Morgan live for many years following this incident.  A World War 2 draft card lists him as a retired city fireman and gives Barney Houston as a contact for more information. 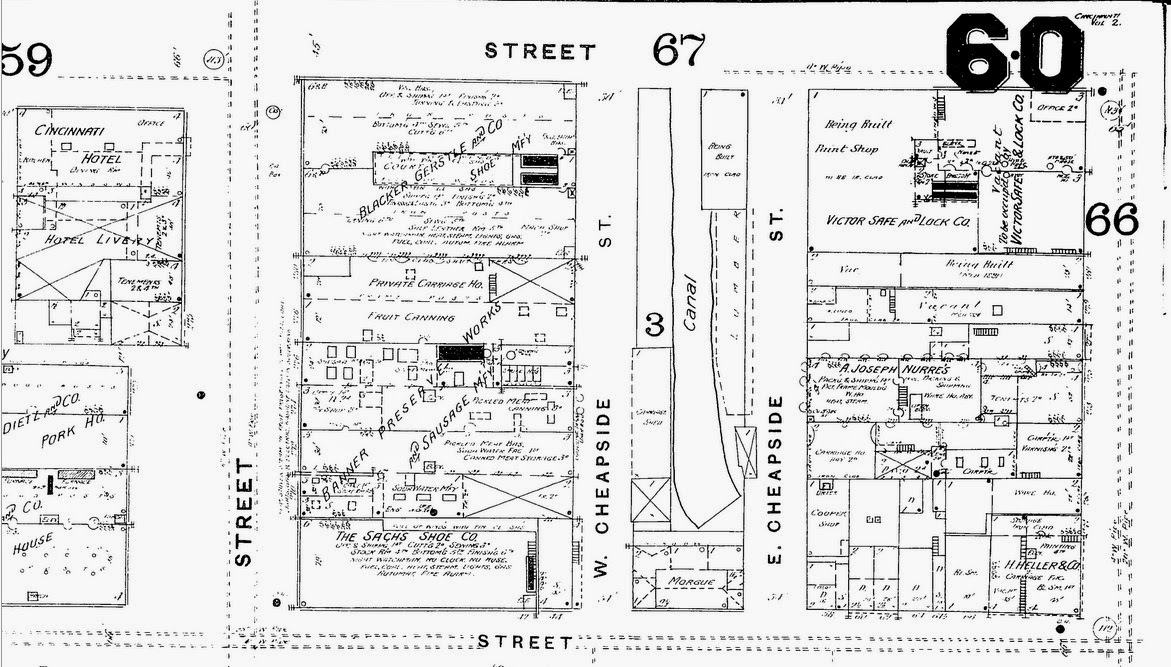 A portion of the fire area as it appeared around 1891.  9th Street runs across the top of the image and 8th St the bottom.
Sycamore is the first street running vertically on the left.  The building listed as the Blacker Gerstle Co contained
The Krippendorf O'Neil Shoe Co & Twinlock Co at the time of the fire.
Note open area in the middle of the buildings where the night watchman initially spotted the blaze.
Engine 4 was crushed on 9th Street just outside the Cincinnati Hotel (upper left) and Grear
was killed in the street at this location as well.
Sanburn Insurance Co map - Ohiolink