The Tragic Story of William and Patrick Haley

William and Patrick Haley lived at 950 Martin Street with their 63 year old mother and another brother James in 1900.  Their mother Margaret was a widow as was Patrick.  The first tragedy the family would experience unfolded in this year.  William was just down the street from his home at Kruse's Saloon when he got into an argument about politics with his friend Tim Reardon.  Haley was very vocal and attracted the attention of a number of other patrons.  As things became tense the men were directed to leave the saloon and they complied.  Reardon walked away as he wanted to avoid a confrontation but the other men were more inclined to continue the dispute.  A fight quickly ensued.  Haley was outnumbered and did what he could to defend himself.  He was knocked to the ground and the men began to kick him.  The noise from this fight roused the men of Engine Co.6 who came running to the scene.  The crowd backed off and Haley rose to his feet.  Not having had enough, Haley continued to boast that he could take any man among the crowd.  Harry White came forward and they went to the ground.  Haley was getting the best of Harry when Edwin White, Harry's brother, pushed forward and kicked Haley solidly in the head.  Firemen broke the crowd up and dragged Haley back to their quarters.  The crowd followed and soon it was clear the men were going to rush the firehouse.  Firemen grabbed nearby tools to arm themselves.  As the crowd surged into the firehouse someone yelled "cops" and the men scattered.  Two officers arrived and Haley requested they escort him home.  He complained of being injured.  While on their way to his home, Harry White appeared and claimed Haley had cut him.  Officers decided to arrest both men and they were taken to the Hammond Street Station.  White posted bond and was released by Haley did not make bond and was told he would spend the night in jail.  Around 4:30 in the morning on the 24th of September Haley was found dead in his cell by the turnkey.  The White Brothers were later arrested and charged with murder. 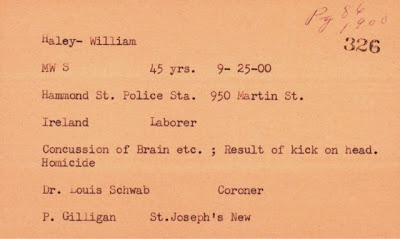 
Tragedy would strike the Haley family again about a decade later.  In May 1909 Engine Co.6 relocated to its new quarters at Pearl and Martin Streets.  On July 16th Ladder Co.15 was organized from the same quarters.  It had been a year of growth for the fire department.  91 substitute firemen had been made regular firefighters during the year to accommodate a new schedule for firemen that gave them each every fifth day off.  The city had also been modernizing and their was a growing use of a new utility, natural gas.  On December 22, 1909, the department was stretched thin and the chief was forced to call on "outside subs" to fill the roster.  An outside substitute was not on the list of regular subs and had never had to submit to any physical or oral test.  They were used as a last resort on the schedule and were paid $2 per day for their service when on duty.

Patrick Haley was called in to work on this occasion.  Unfortunately that is when a terrible accident struck the quarters of Engine Co.6.  The men must have smelled gas and Captain Newman and Patrick Haley went to the basement of the fire company quarters to check things out.  Something sparked an explosion.  Haley and Newman were rushed to Good Samaritan Hospital.  Haley had been badly burned and was given pain medication to help calm him.  On Christmas Day, several days after his arrival at Good Sam, Haley died of his injuries.  Captain Newman was expected to recover.  By this time Haley had remarried and resided at 996 E.3rd Street. 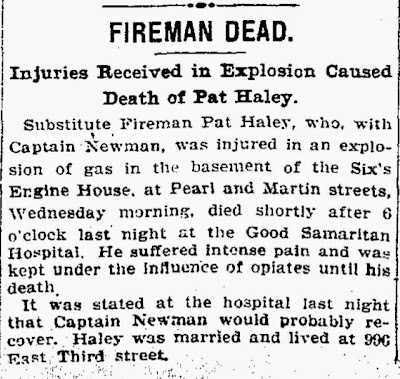 
Unfortunately for the Haley family, because of his status as an outside substitute, Haley did not qualify for a widows pension.  This loophole prevented his death from being recognized as a Line of Duty Death and his name has never been mentioned among the honored men lost in service to the department and the city.  Chief Archibald must have recognized this family had suffered and not gained compensation from the city.  Just a few days later on January 01, 1910 he appointed Thomas Patrick Haley a substitute at the same firehouse where his relative Patrick Haley was caught in the explosion of gas that cost him his life.  Though this appointment indicates Chief Archibald was sensitive to the loss suffered by the Haley Family, the chief makes no mention of Haley's death in his annual report for the year.  Indeed he reports, "I am pleased to state that no fatal accidents occurred during the past year."  The closest anyone comes to noting the death was the Fire and Police Department Surgeon Thomas C. Minor M.D., who in his annual report noted "within the past few months the so called natural gas introduced in this city has caused innumerable accidents to firemen many of whom have been blown up, even in engine houses and at fire cisterns, by this insidious and dangerous explosive introduced under the plea of public economy."  Though Haley is not mentioned by name it seems unlikely that Minor was not thinking of him when he wrote this in his report to city leaders. 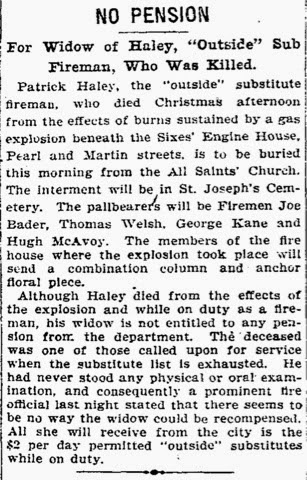 
Patrick Haley would ultimately be lost to history and his family never did receive the pension that would otherwise have provided some benefit to any other regular substitute or firemen in service of the city.  Haley likely acted in the role of outside substitute for a long time as the 1900 census listed both he and his brother William as firemen.  Patrick Haley's death certificate also listed his occupation as fireman.  Though he was not honored or mentioned by the department it seems appropriate to place his name among those who made the ultimate sacrifice in service to the department and the city.

As a side note, natural gas would continue to be a problem in the city for some time to come.  Less than a year after Haley was killed in the basement of Engine Co.6, The quarters of Engine Co.11 would be the site of still another gas explosion.  On November 23, 1910 the quarters of Engine Co.11 at Eastern and Vance was rocked by an explosion that forced the house to be abandoned immediately.  Ironically the chief decided to locate Engine 11 at Engine 06s quarters until a new house could be built for the company. 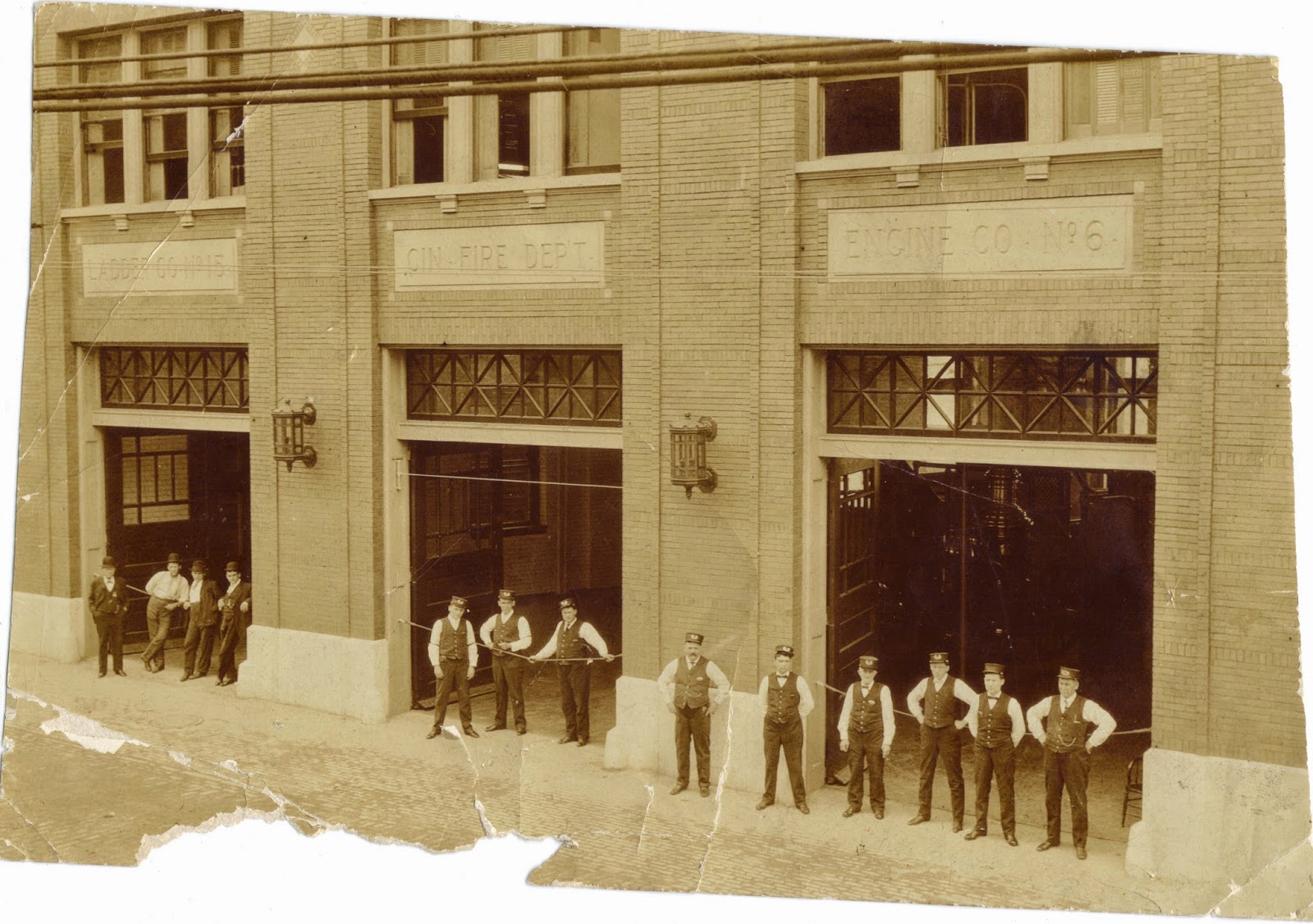 
The Haley Family experienced a number of tragic episodes including the loss of Patrick to the blast at Engine Co.6s quarters.  Patrick Haley will be added to the names of the men honored after having lost their lives in service to the department.  CFD Roll of Honor:


Special thanks to Columbus Firefighter and Historian Chris Klein for providing much of the information used in the re-discovery of this incident.

Herman Krieger - Assistant Engineer of Fire Co. 48 collapsed and died while operating the pump at the scene of a shed fire in the 6800 block of Carthage Pike on 02 May 1927.  Up to this point knowledge of his death was lost.  Krieger appears on a document produced by Chief Houston that lists department deaths from 1920-1930.


According to the Cincinnati Enquirer Krieger was made a substitute firefighter on 10 Jul 1907 and was then promoted to regular firefighter on 11 Jul 1908.  At the time of his death he was 42 years old and resided at 2522 Cleinview Avenue.  A doctor was immediately called to the scene to tend to Krieger but he arrived and found no signs of life. 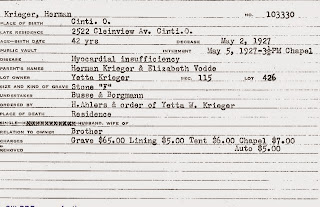 
The following information will be added to the Honor Roll of the Cincinnati Fire Department:

Special thanks to Asst Chief Robert Kuhn for finding the report generated by Chief Houston.  The report contains the names of three other LODDs that are not on our list at this time.  Each of those situations are still being researched.
Posted by Roughneck12 at 8:58 AM No comments:


Union Terminal is a unique and special building in Cincinnati and Hamilton County.  Today the old Union Terminal serves as the home to the Cincinnati Children's Museum, The Cincinnati Natural History Museum, and the Cincinnati Historic Society Museum and Library.  The library of the historic society contains many of the earliest documents generated by the fire department.  Annual reports signed by Miles Greenwood and photographs of early fire disasters represent a small portion of the fire department collection at the historic society.  Protecting and celebrating the history of the fire department and the region is now the primary purpose of the Union Terminal.  It is critical that we value and protect our history.  Union Terminal is one of the most iconic buildings in the area and has come to be a natural fit for these institutions of preservation.  Today voters decide on Issue 8 which would give the museum center the funds needed to repair and maintain the building.  Saving Union Terminal has been a major issue in the past.  Efforts to protect it even included turning it into a shopping center.  Talk to a great many WW2 veterans who had to travel through the Midwest both to their point of departure and to return home and you will find that they often have fantastic memories of Cincinnati's Union Terminal.  The building and its institutions are a window into our past and a foundation for our future.  Please consider the importance of this building when determining your position on Issue 8. 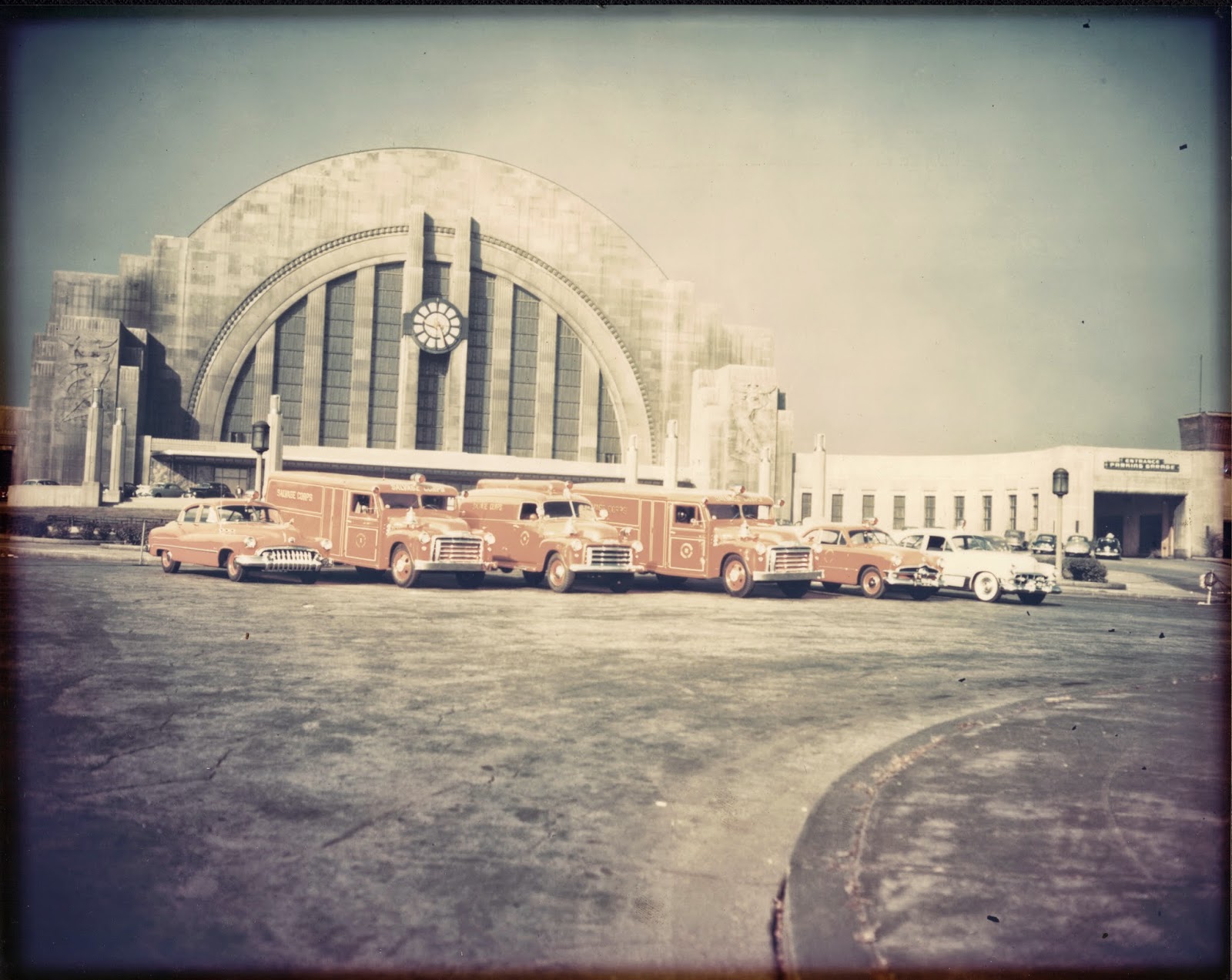