2015 has been a tragic year for the public safety services in Cincinnati.  Having just sustained the loss of FAO Daryl Gordon in a fire on 26 March 2015, we are now faced with the tragic loss of Police Officer Sonny Kim.  Kim was a father, husband, friend, and mentor to many.  He was truly one of Cincinnati's finest and his absence will be long felt.  We pay tribute to the sacrifice made by Officer Kim and extend our heartfelt condolences to his family and friends.

Sadly 2015 is not the only year in recent history in which both the fire department and police departments of the City of Cincinnati sustained a loss in the same year.  The last time this occurred was in 1967.  On August 6th of that year Police Sergeant Albert Weller succumbed to a heart attack while attempting to bring order to a riotous crowd on board a riverboat at the public landing.  Just over a month later, on September 10th, Firefighter John Bickers was struck and killed by a drunk driver while directing traffic as the engine backed into quarters after returning from a false alarm of fire.  1961 also saw the loss of police and fire personnel in the line of duty.  On 11 March, Police Patrolman Donald Martin walked up on a group of men working to steal a car battery from a auto dealership.  After a struggle, Martin was shot multiple times and ultimately died from his injuries.  The murderers escaped and the case would not be solved for 44 years.  Three months later, 13 June 1961, Fire Marshal Robert Riegler collapsed and died shortly after arrival at the scene of a fire having been overcome by smoke. 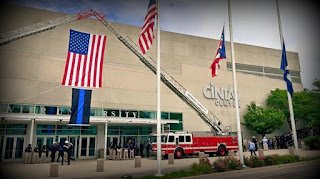 CFD Ladder 19 and Ladder 29 (out of frame) show support for fallen CPD Officer Kim with the Honor Tower outside the Cintas Center
Photo: K.Weller


To learn more about these and other tragic losses sustained by the CFD and CPD please visit the following sites which pay tribute to our fallen public servants:


The Roll of Honor of the Cincinnati Fire Department 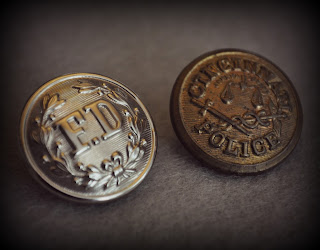 
Around 4am Patrolman Emerson Lucas called in on the radio to report a fire in the street railway car barn at 1611 Hewitt Avenue in Walnut Hills.  E23 was the first fire company to arrive on scene.  When companies pulled up the entire structure was fully involved despite a three minute response time.  Fire Marshal William Flamm arrived and put in the call for a 3rd Alarm.  When the fire was dispatched Marshal George rushed to his buggy along with driver Joseph Ellison of Ladder 16.  They pulled out of the firehouse and sped to the scene when without warning their brakes "dragged" as they turned onto Madison from Erie.  The vehicle flipped and both men were lucky to escape without injury.  To firefighters working the blaze suffered minor hand lacerations. 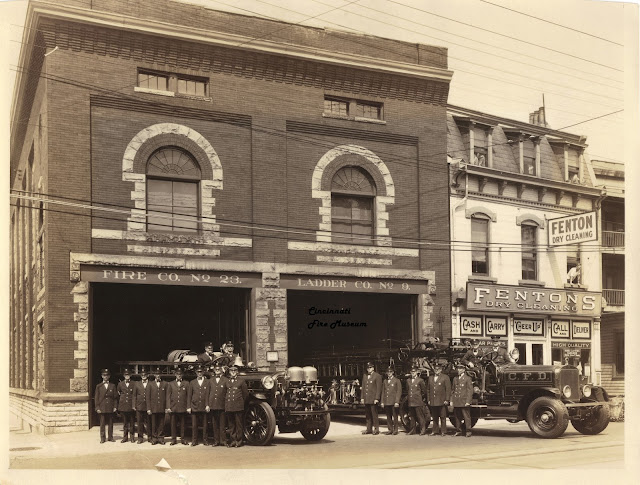 Engine 23 and Ladder 9 (Renumber Ladder 23) were the first companies to arrive
at the scene of the Car Barn Fire
Courtesy: Cincinnati Fire Museum

Firefighter Joseph Ellison who was driving Marshal George's Buggy when it flipped in the intersection of
Erie and Madison while en route to the Car Barn Fire.  They were responding from E46s Quarters on Hyde Park Square
Robb Family Collection


The fire was brought under control in 30 minutes.  17 streetcars were lost in the fire.  The building was in the process of being emptied of streetcars so that it could be remodeled to house gasoline buses.  23 streetcars had been moved from the structure only days earlier.  Chief Houston noted he felt the fire was arson given the fact that the entire structure was involved in fire upon arrival of fire companies.  Arson investigators looked into reports of a couple leaving one of the 17 streetcars hours prior to the fire.  Other reports suggested children might have been responsible. 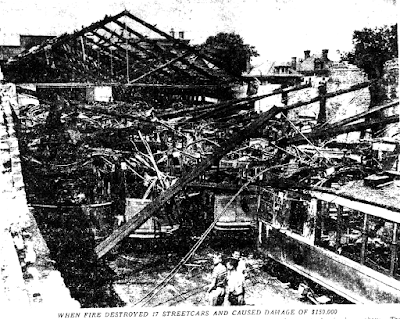 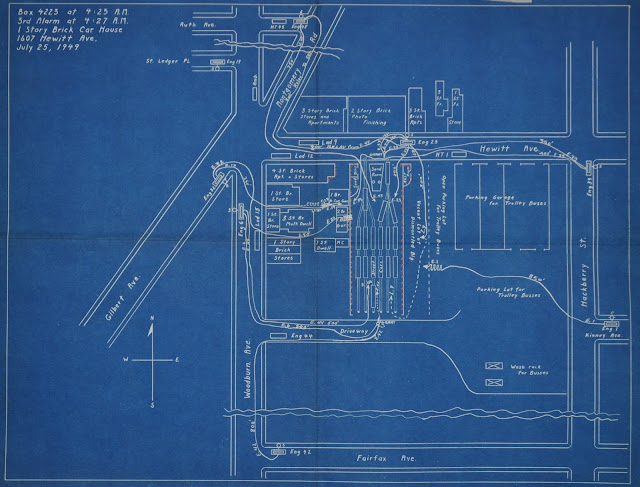 Extra Alarm Fire Blueprint produced by the Cincinnati Fire Department - The blueprint shows the position of apparatus on scene
as well as the location of their hose lines.  The fire area is indicated with red lines.
JPeter Collection

Current view of the location where the Walnut Hills Car Barn was located.
The structure was situated where the parking lot on the left side of the image is now.
Google Street View