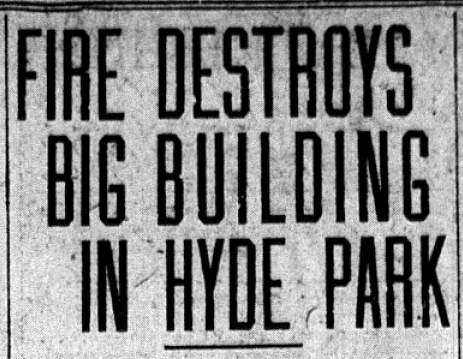 A loud crack tore through her dreams.  Young Lois Riley sprang from bed to a nightmare.  Her apartment was on fire and the heat was already intense enough to split the bathtub causing the loud snap that jerked her from her sleep.  Arthur Wells was just getting out of bed on a frigid Sunday morning when he heard Lois scream two floors below.  Arthur was the janitor at the Al'aise Apartment Building on Hyde Park Square.  He  also made his home on the fourth floor of the building.  He tossed his clothes on and moved for the steps.  As he reached the 2nd floor it became apparent there was a fire in the building.  Smoke started to spread through the apartments.  Her calls for help woke the rest of the Riley family who were assisted from the building by Mr. Wells.  When they reached the bottom of the steps, Arthur ran to the firehouse at the end of the square yelling for help.  Firemen from Engine 46 were on scene in a matter of minutes.  Acting Marshal Hall recognized the threat posed by the fire and called for a ten blow response.  Firemen immediately whet to action evacuating the building.  It was a Sunday morning and the first floor shops had not opened for business.  Occupants were startled by the noise, smoke, and calls of "fire."  Everyone was rushed into the freezing cold wearing only their night clothes.  One resident, Mrs. Holden had to be carried down the steps by policemen who were at work helping the firemen.  Many of the residents managed to grab some small article of value as they left their apartments.  Soon after the policemen reached the ground level with Mrs. Holden the stairway they were using collapsed.  All the residents escaped the building uninjured. 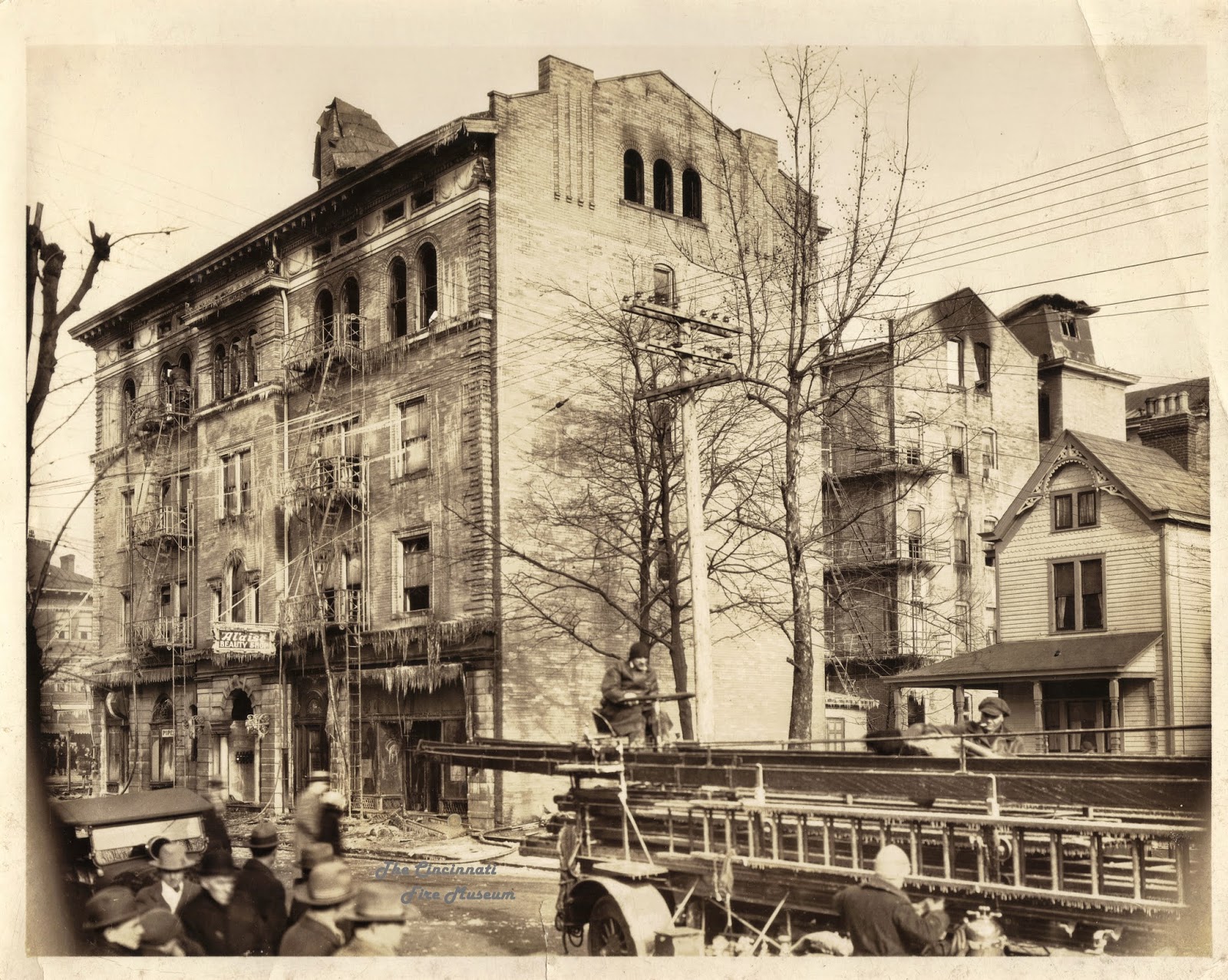 On the street more fire engines and ladder trucks were arriving on the scene.  Fire hose was stretched into the building and an attack made on the fire.  Ice began to cover the outside of the building.  Fire lines started to freeze to the ladders from which they were deployed.  The firemen themselves were locked inside their frozen rubber fire coats.  Chief Barney Houston arrived on scene to take command.  As he made his way up an ice covered stairway he fell backward.  A sharp pain in his back necessitated his removal to General Hospital via police patrol.  The Salvage Corps under the command of Captain Conway had arrived on scene and started forcing entry into the stores on the first floor.  Businesses included The Middlekamp Pharmacy, Kroger Grocery, Nagele Dry Cleaners, The "L" Shoe Store, The Charles F. Lahke Hardware Store, The Busy Bee Sandwich Shop, and a Beauty Shop.  Tarpaulins were deployed to protect the stock, most of which was saved.  Albert Toeffer and Frank Filusth, members of Engine 16 were working a hose line on the 4th floor when they saw the roof begin to sag.  They quickly abandoned their position as the roof came crashing through the attic.  Despite the frigid cold the firemen managed to save the building but nearly all of the apartments and their contents were destroyed. 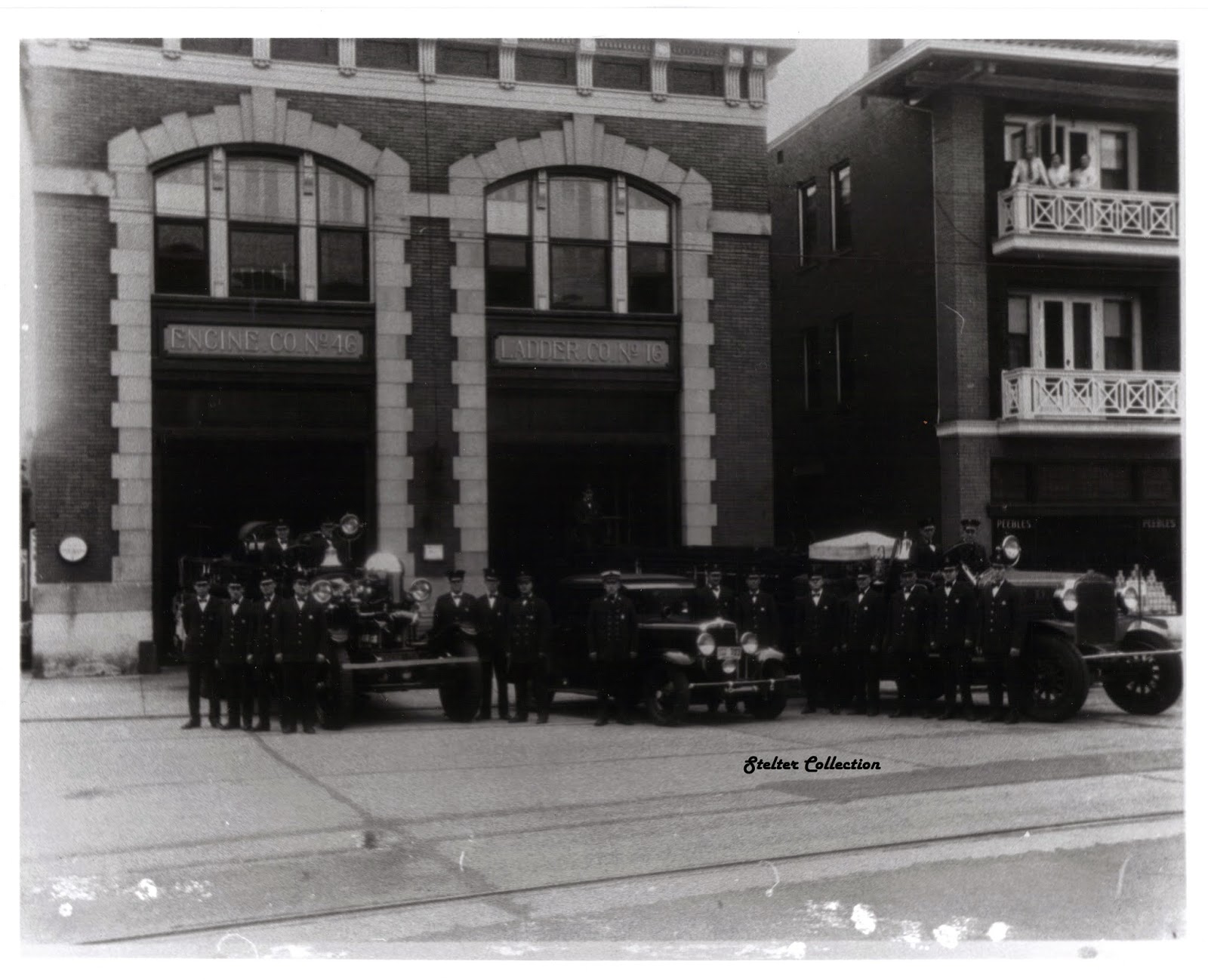 The fire was thought to have started in the basement of the Middlekamp Drug Store.  Three elevator shafts in the building coupled with a strong draft generated in the shafts by a stiff north wind facilitated the rapid spread of the fire throughout the building.  The residents who managed to escape found shelter from the cold in the firehouse and the residence of the Rev. Maxwell Long of the Episcopal Church of the Little Redeemer on Edwards Road.  Members of the church had been preparing a Sunday communion breakfast when word of the fire reached them.  The congregation went to work bringing the victims inside.  Other members of the church went into the street and distributed the breakfast they had prepared to the firemen and police officers who were unable to step away from the job at hand. 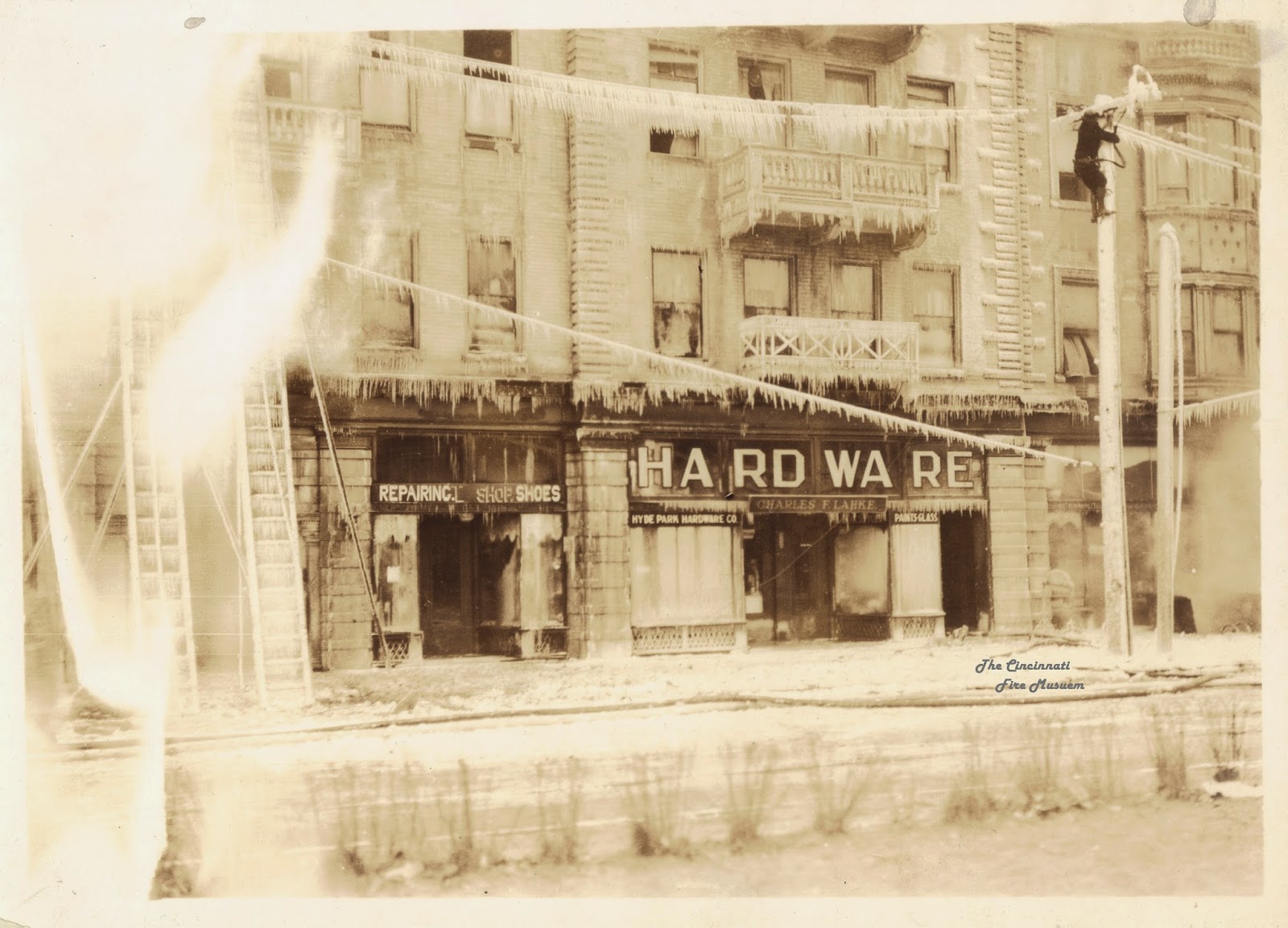 Thankfully the Al'aise Apartment Building was saved and it remains to this day one of the most prominent buildings on Cincinnati's beautiful Hyde Park Square.  Next time you are enjoying some Graeters Ice Cream on the Square look over at the Al'aise and remember that cold Sunday in 1927 when it was almost lost. 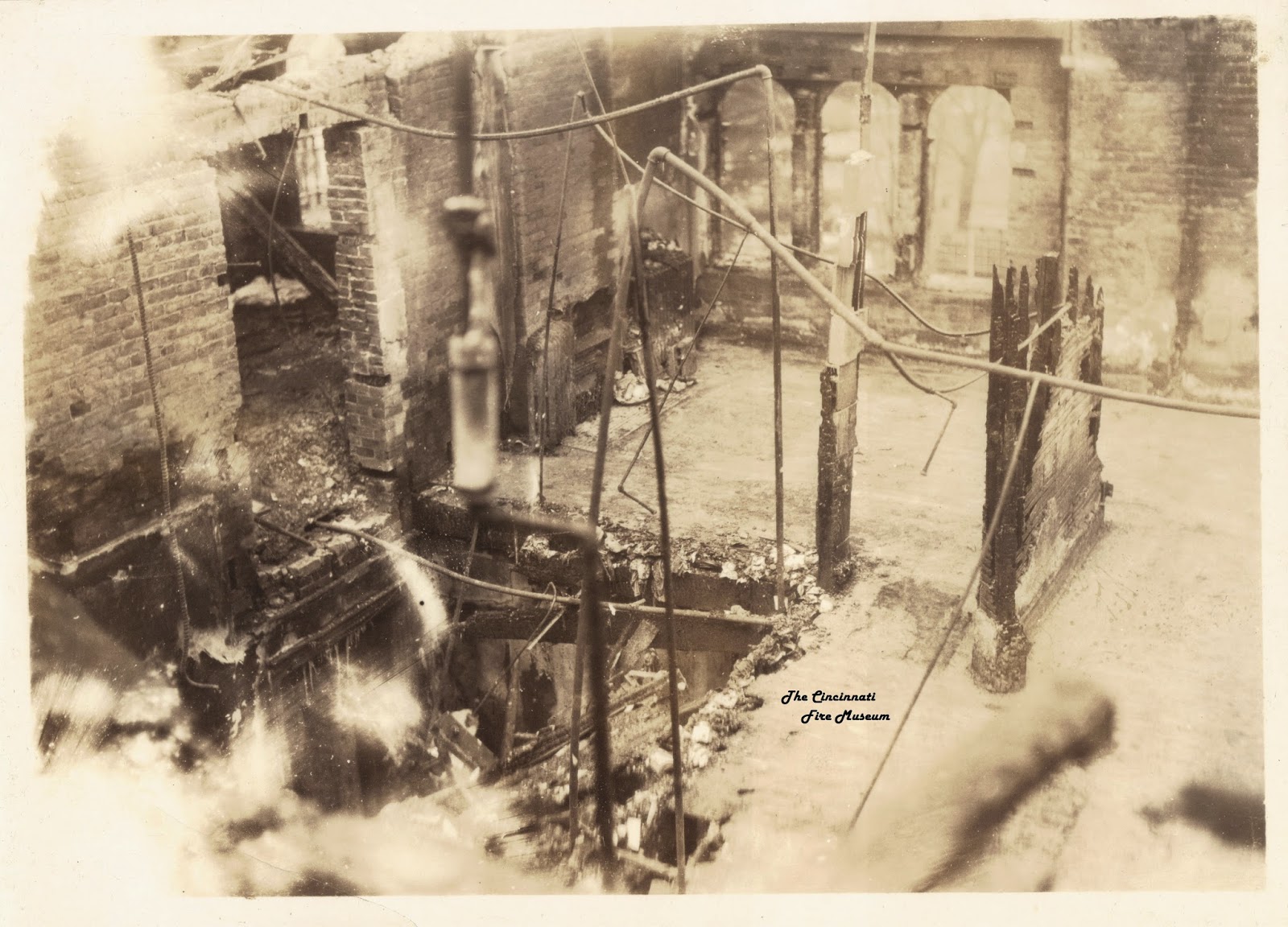 The Cincinnati Fire Museum
Damage inside the Al'aise Apartment Building 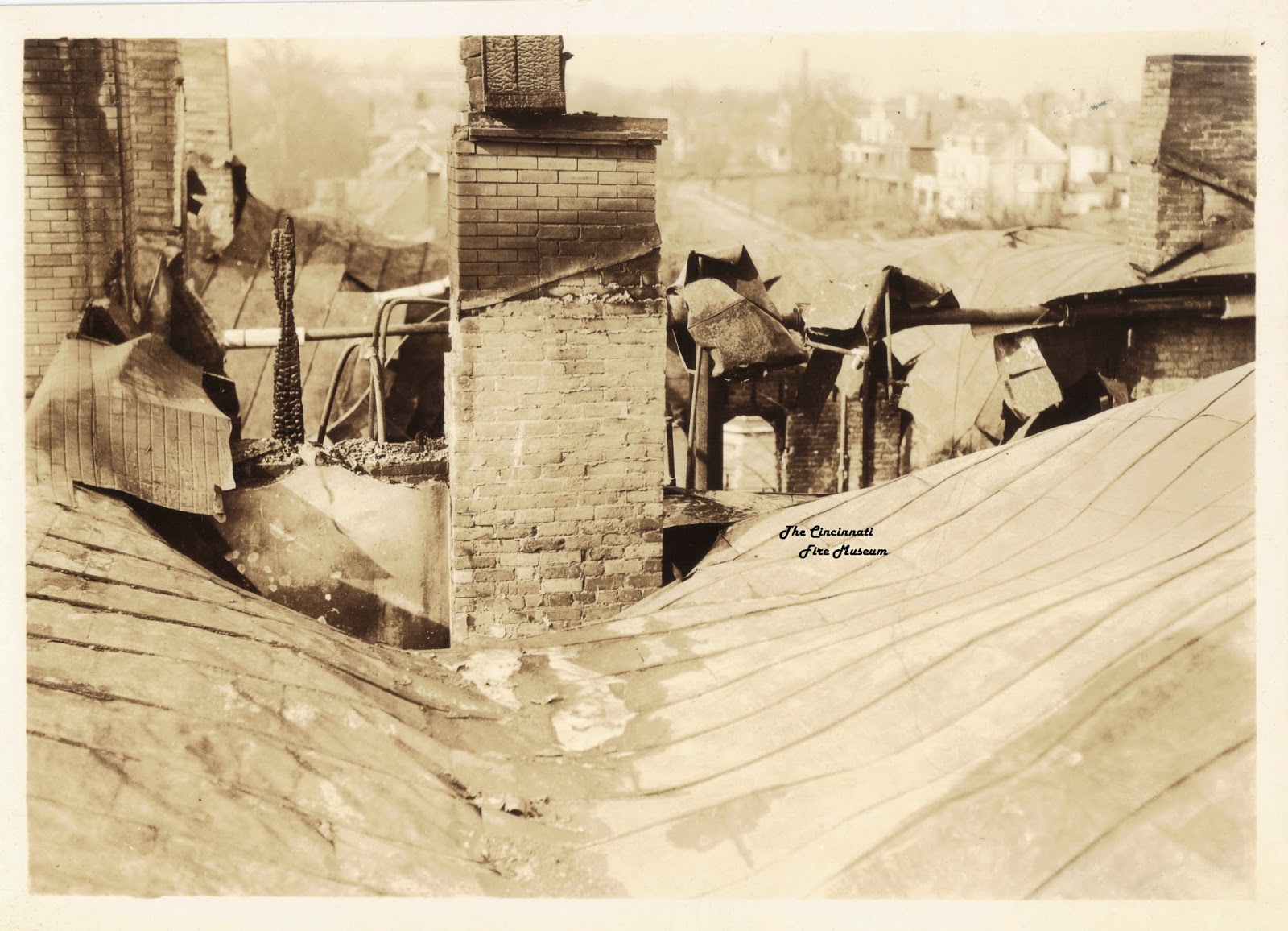