Explosion of the "Uncle Joe Ross"

Cincinnati was a major production center of steam fire engines and the Cincinnati Fire Department was a national leader in adopting this technology to confront the problems of fire in the city.  Cincinnati became the first fire department in the country to use steam fire engines pulled by horse and operated by a professional paid fire department.  This unique combination of three key elements established a new standard for quality in the fire service.  The Cincinnati model would not be surpassed for more than 60 years when mechanized apparatus started to replace horse drawn steamers.  Other cities saw the success of Cincinnati's new professional department and wanted to bring the steam fire engines to their communities.  When considering what engines to purchase, representatives of these cities often made the trip to Cincinnati to see demonstrations of their engines in action.  Such was the case on December 5th, 1855.  The famous first steamer in Cincinnati's fleet, "The Uncle Joe Ross," was brought out for a demonstration before a committee of men from Chicago.

Alexander Latta, the inventor of the engine, was on hand as engineer John Winterbottom brought the engine up to pressure.  As the steam pressure reached its highest point a hose burst and people tried to warn Winterbottom to stop the engine.  Others had made warning regarding how high the pressure was getting and the amount of water in the engine.  Finally Winterbottom shut the engine off but just as it stopped it exploded in a blast that tossed the engineer into the air.  Windows were blown out of neighboring buildings.  Winterbottom had been killed and Latta injured. 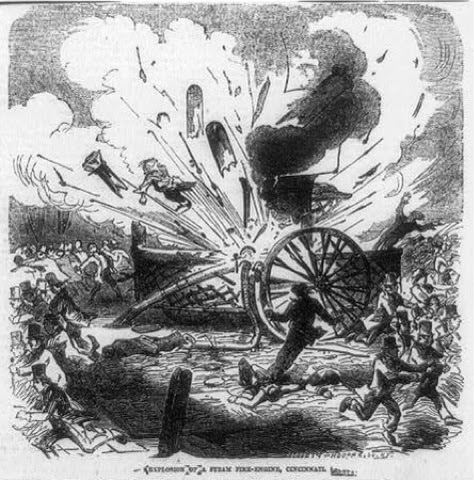 B.Houston Collection
A newspaper image of the blast that killed Winterbottom

New reports indicate a subsequent investigation led by Miles Greenwood found that the explosion was the result of an error made by Winterbottom and not an inherent problem with the engine.

None of the newspaper sources found to this point identify John Winterbottom as a firefighter.  He is described by all sources as an engineer.  Certainly A.B.Latta, as a manufacturer of steam fire engines, would employ his own engineers.  Fortunately the old History of the Cincinnati Fire Department, published by the Fireman's Protective Association in 1895, provides some additional detail.  The history records that, "In the year 1855 three firemen were killed, one by the explosion of one of the steam engines during a trial before a committee from the City Council of Chicago."  This resource is the best evidence of Winterbottoms status as a firefighter. (pg.121) 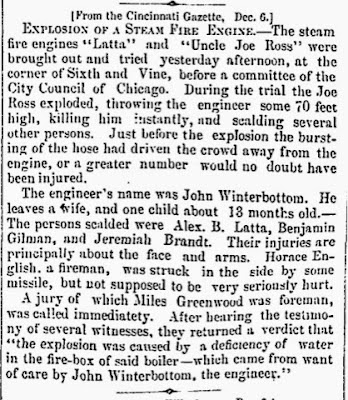 Boston Daily Advertiser - Explosion of a Steam Fire Engine - December 10, 1855
Story of the explosion as told by the Cincinnati Commercial Gazette and Reprinted in Boston 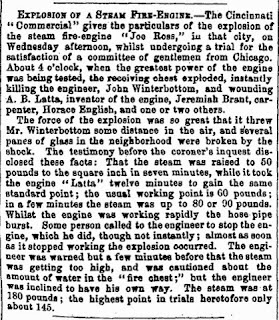 
Update (9/24/2015):  J.Winterbottom is listed as a member of Steam Engine Fire Co.14 located on the North side of 5th between Smith and Mound Streets.  He is shown living on 5th Street opposite the engine house.  This provides solid evidence of Winterbottoms status as a member of the fire department.  See the image of the company roster below: 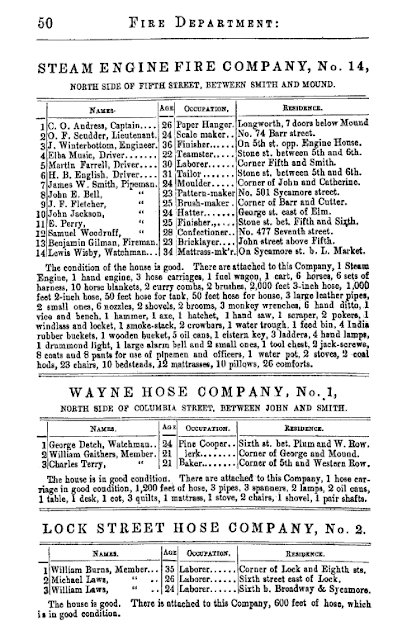 
John Winterbottom has been added to the Cincinnati Fire Department's Roll of Honor listing members who gave their life while in the service of the fire department: 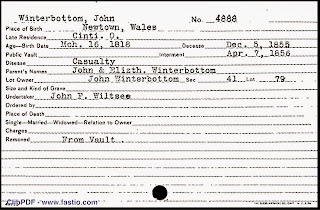