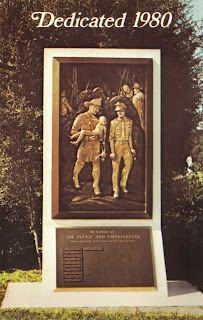 
In 1980 Vine Street Hill Cemetery honored fallen members of the public safety services buried on their cemetery grounds with a public memorial.  The memorial included a bronze plaque that listed the names of Firefighters and Police Officers who were killed in the line of duty and subsequently buried in the cemetery.  At some point in the recent past the monument was desecrated.  The bronze name plates were pulled off of the plaque. 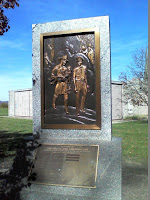 
Members of the Greater Cincinnati Police Museum were conducting research related to the death of a member who was buried at Vine Street Hill Cemetery.  It was found this member was interred without a headstone.  The Greater Cincinnati Police Museum and the Cemetery purchased a headstone to honor this member and it has now been installed in the cemetery.  It was during the course of this research that the damage to the public safety monument came to light. 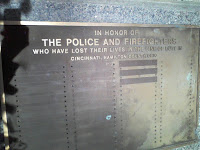 
The Greater Cincinnati Police Museum conducted research with the cemetery and Cincinnati Fire Museum to reconstruct the LODD that was vandalized.  The monument has now been repaired and will be re-dedicated during a ceremony on November 4th.

The newly installed headstone for fallen Patrolman Frederick Karsch who was shot during a public disturbance on November 3, 1880 will also be featured in the ceremony.  Patrolman Karsch died on November 4, 1880 and the ceremony coincides with the 135th anniversary of his death in the line of duty.

Additional information about the above listed Firefighter LODDs can be found by clicking the link:
Cincinnati Fire Department Roll of Honor

Additional information about the police officers listed above can be found on the website of the Greater Cincinnati Police Museum
Posted by Roughneck12 at 4:44 PM